Two of the most common comments I receive either at the beginning of an engagement sessions is, “We are so NOT photogenic” and “my fiance´ hates to have his photo taken.” I chuckle to myself each time I hear this because I hear it SO often, and I know their minds will have changed when I am done with them. My theory is that there is no such thing as a non-photogenic person, especially when it comes to being photographed with the one you have chosen to spend your life with. It is my job to help you become photogenic and create photos that you will cherish for a lifetime. It all comes down with interactions and posing.

So how do I do it? How do I help my couples look relaxed, natural and totally absorbed in one another? I’ll tell ya…

Observing a couple’s interactions with one another is one of the most crucial keys to achieving natural poses. As we walk, talk, joke and laugh I am also watching. I’m looking to see how they touch each other. I take note as to where their hands fall onto one another when they kiss. Does he touch her lower back as they walk? Does she perch up onto a tip-toe when she wraps her arms around his neck? If these interactions come natural to the couple in front of a stranger holding a camera, then my job is CAKE! (this only happens about once a year to be honest). If the couple isn’t fond of P.D.A, or they’re a bit nervous, I talk them through it…by letting them be. I almost always start my sessions by telling the couple to love each other up while I mess with my settings on my camera, test the light and figure out my surroundings. This allows them a few more moments to settle in their scene while I snap a few candids with no posing. Then I may ask, “You ready to roll? Here we go! What would you do if it was only 20º out and you wanted to keep her warm? How would you wrap her up?” Done. Easy. Super cute pose every time. Some girls receive a natural, warm kiss on their forehead while others receive a nuzzle into their neck. Whatever happens, I capture their natural state.  If no cutesy-ness takes place, I may encourage a small adjustment which could be as simple as dropping their gazes to the same spot toward their feet.

Posing 201: Pose To Not Look Posed

I pose. A LOT! And I don’t know why, but I used to loathe the phrase “now melt into each other.” It seems so cliche and corny, but for some reason I cannot find another phrase that fits what I want my couples to do! As I tell them, they have been together long enough that they know where their bodies fit together. So when it’s time to get close and romantic, I want their limbs and bodies doing what they normally do when they don’t have a photographer telling them what to do. So, in essence…melt into each other.

When I ask the girl to lean in for a kiss I keep a mindful eye as to where her hand goes…in her pocket is not the correct place. Maybe we want it on the back of his neck, or a playful tug at his blazer…hand placement is everything. It can and will take a photo from stiff and posed to natural and romantic.

Looking at the camera, holding each other and smiling can be terribly awkward…for everyone. I have found that if I ask my couple, “If you were at a party and your friend just whipped out her phone and said ‘oh my god you guys are the cutest, let me take your picture,’ what would you do?” What do you think they do? They slip their arms around each other’s lower backs, tilt their heads in and give genuine smiles. So I do the same damned thing! Ask them to close the distance between their heads, hold each other tight and give their best smiles.

Posing 301: Get Silly and Capture Laughs

I’m not a spontaneously funny person. I sure wish I was, it would make my job sooooo much easier. Natural laughs are priceless and if I could pay to whip out a hilarious joke on demand, I’d sign up for a lifetime subscription. I’ve accepted the fact that it’s just not me. So my default is to be my naturally silly, forgetful, and sometimes clumsy self. It usually earns a few laughs when I trip over a word and it comes out accidentally inappropriate, or my competitive side comes out and playful banter over sports takes place. When I learn my couples’ humor, I hone in, adapt and help those natural smiles come out. To take it a step further I may ask the man to fireman carry his lady across the grass so she doesn’t ruin her shoes. Or he may be encouraged to whisper something in her ear that doesn’t have to do with heavy breathing or food (their minds usually go blank after the rules are stated). The more giggles the better. And sometimes this creates quite a bit of movement out of the couple and takes them out of focus or frame, but if I captured genuine and candid laughs, that photo is making the final cut!

Posing 401: Rip Them Out of a Magazine

I’ve only had one groom tell me that he wasn’t interested in having photos looking like he had just stepped out of a magazine. And before he could finish his sentence, his bride jaw-dropped and said, “well I do!” AND SO DO I!! At least one, or two, or a few dozen. I don’t feel complete with a shoot if I don’t feel like we shot the spread of a cologne ad. I want to see the image, feel the mood and smell that cologne! And usually all that takes is a sharp dressed man, a beautiful lady on his arm, a hand in a pocket, and poised gazes off into the distance. You can call me out to be the biggest geek ever, I love the feel of it. But in all honesty, a dramatic pose to polish off an engagement session completes me.

A quick word about our featured couple!! Erin and Josh came up to Spokane from California for the holidays which gave us the perfect time to shoot their engagement session. Josh donned his Marines uniform for half of the shoot which was a perfect touch to document this time in their lives…it doesn’t hurt that he is the epitome of the phrase “a man in uniform.” It was a tad bit cold, but holy hell Erin was a champ in those open-toed heels and tulle skirt, she had me in awe!
Their laughs came natural, his touches to her hair and face were adorably real, and he didn’t protest when I asked him to carry her through the snow to save her toes. An hour in the cold wasn’t enough for me. Cannot wait for their wedding in March!!! Thank you Josh and thank you Erin for serving our great country. 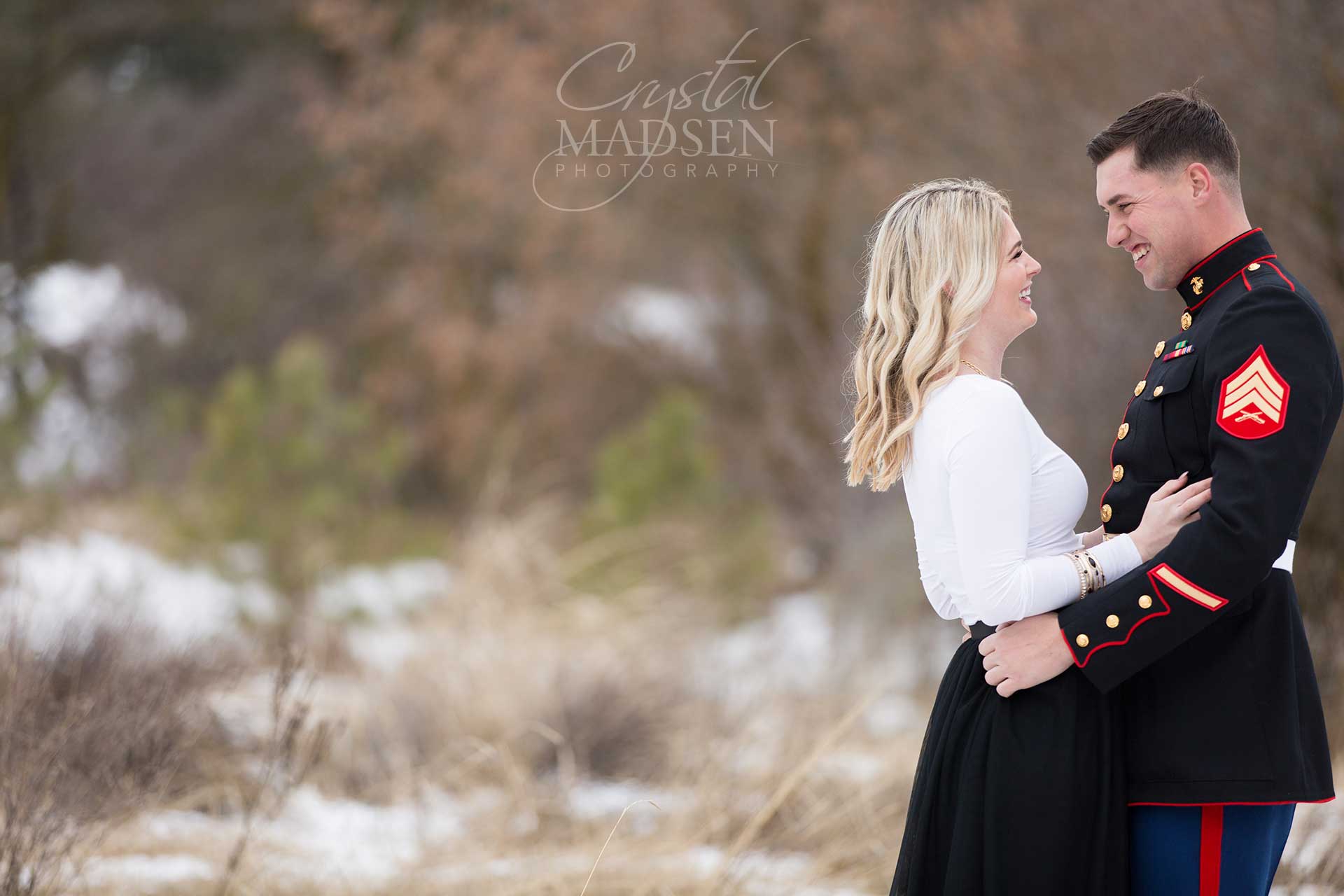 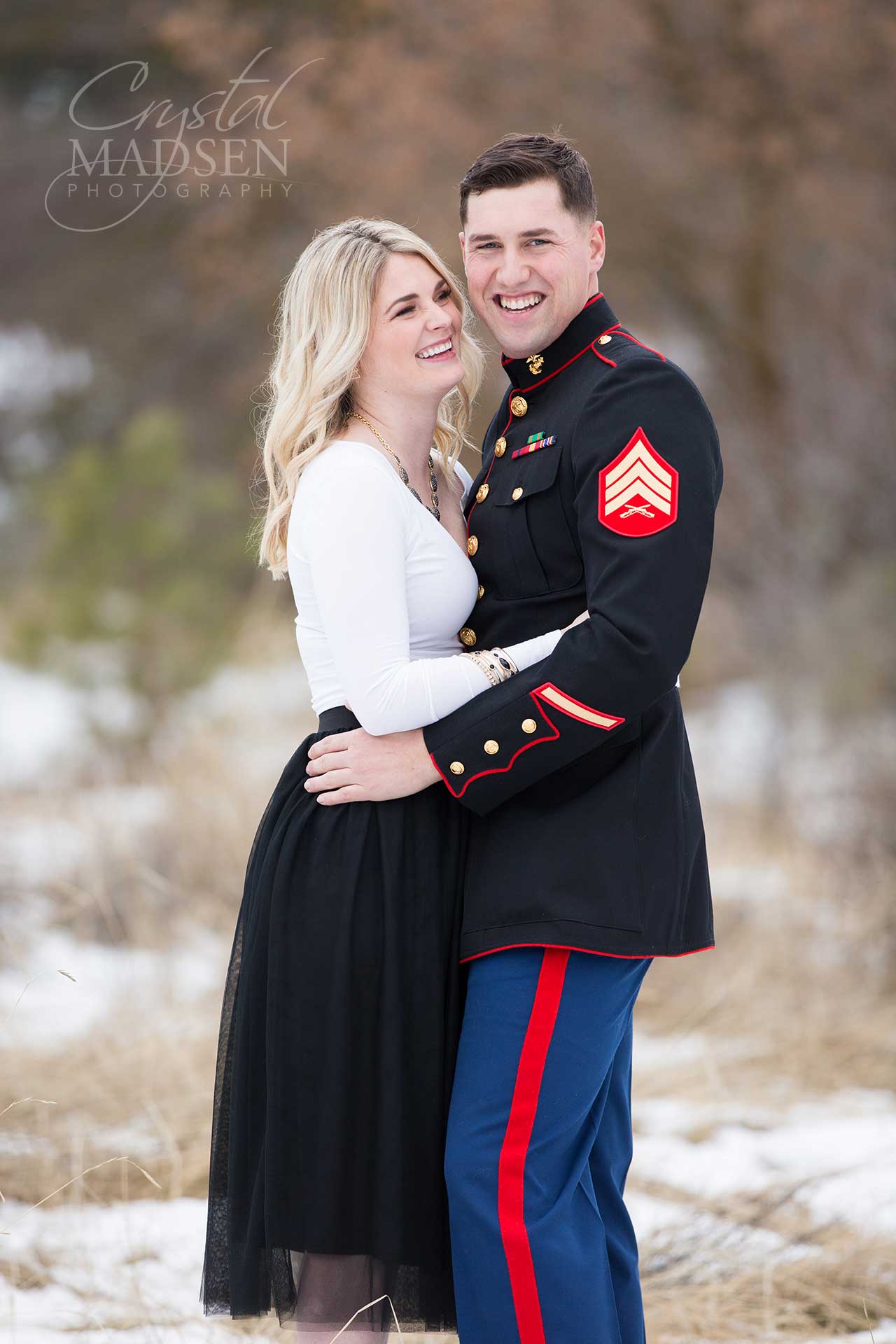 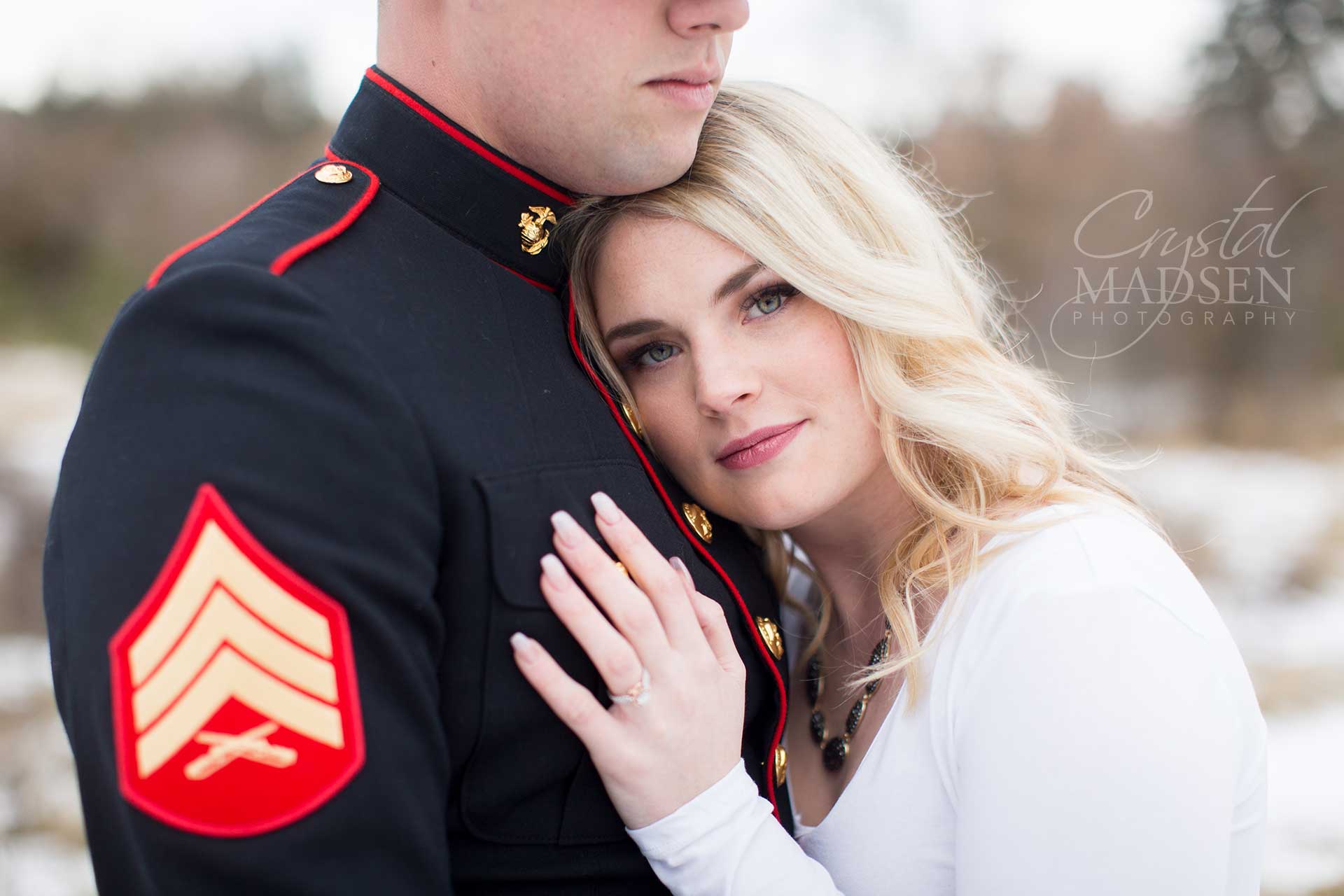 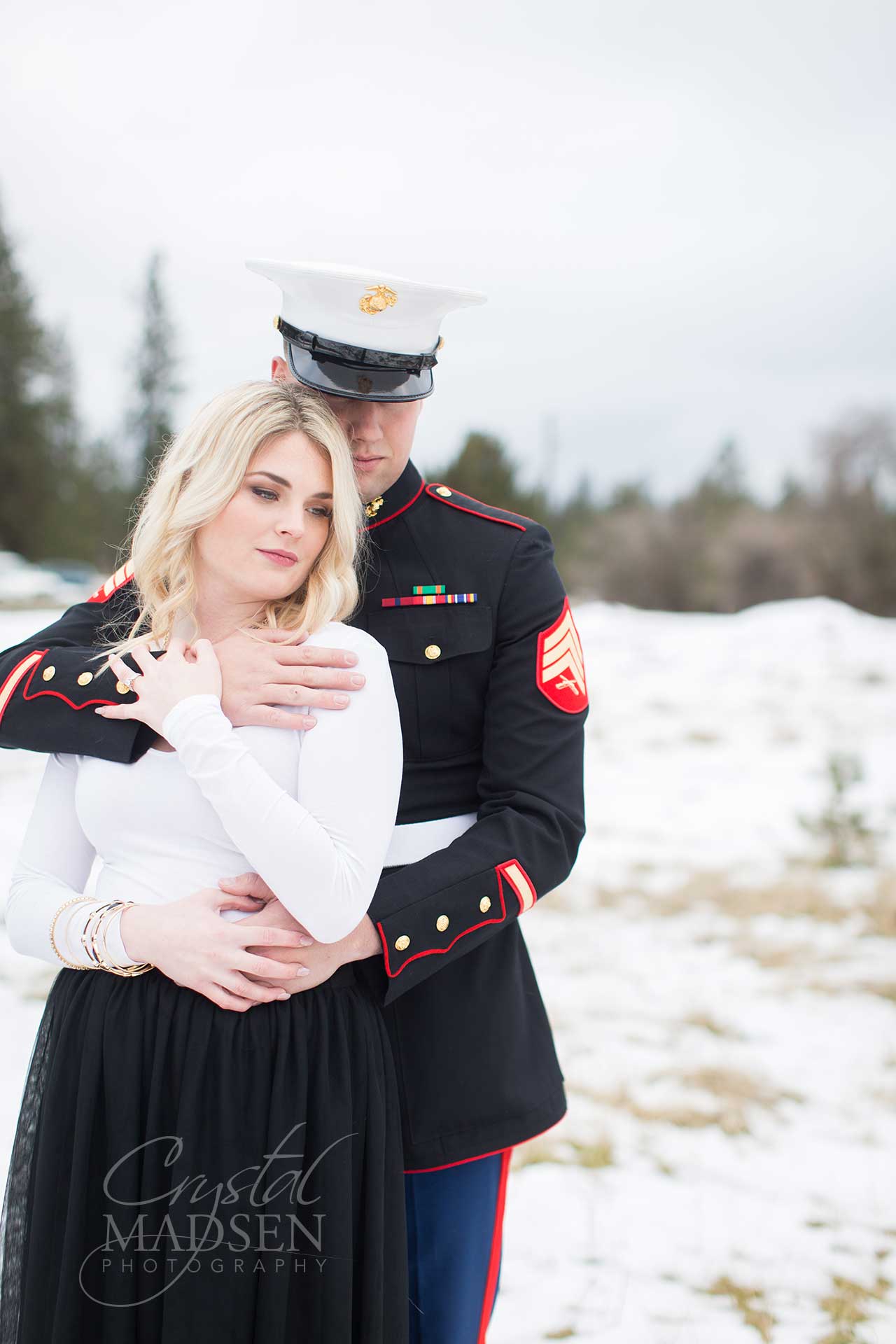 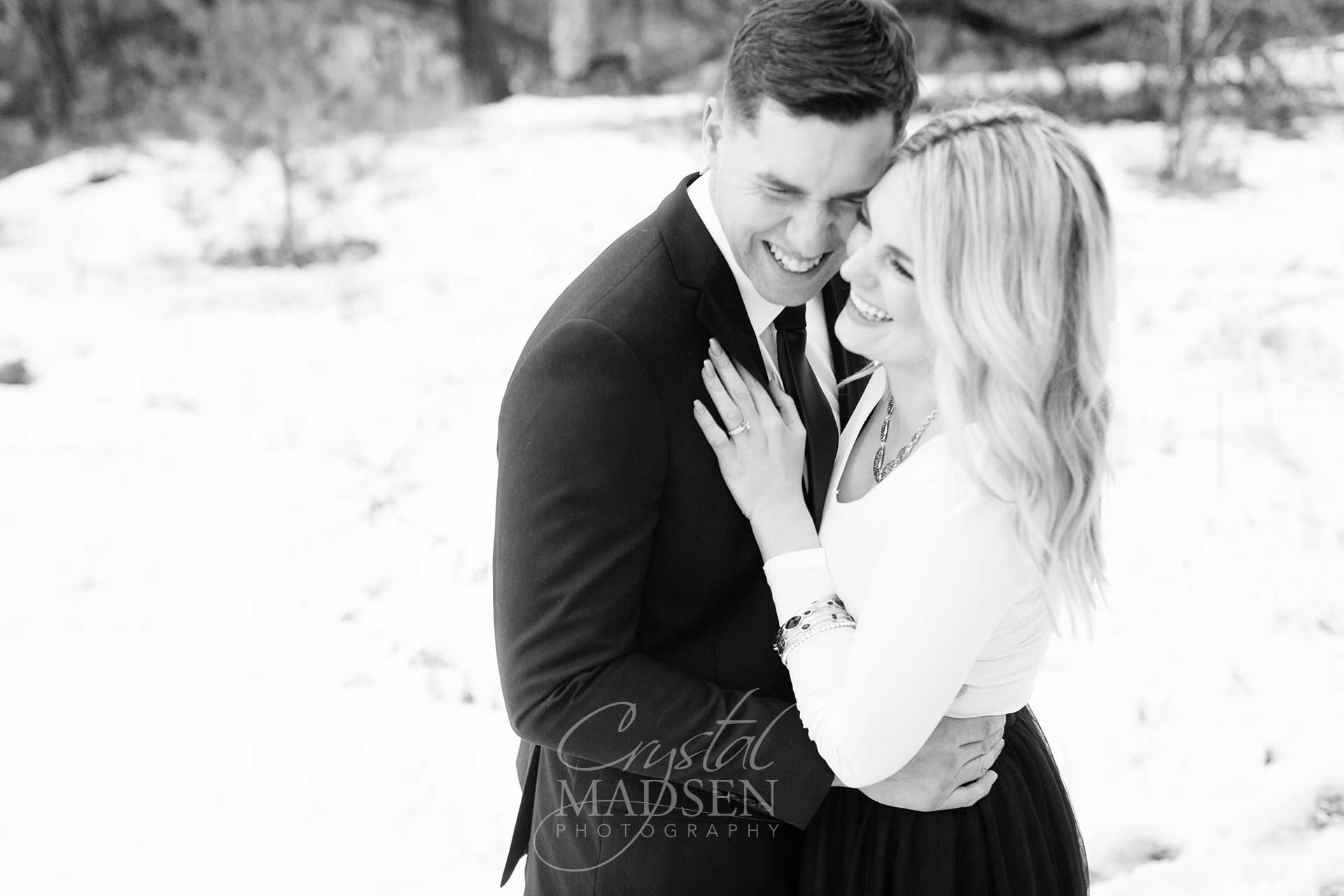 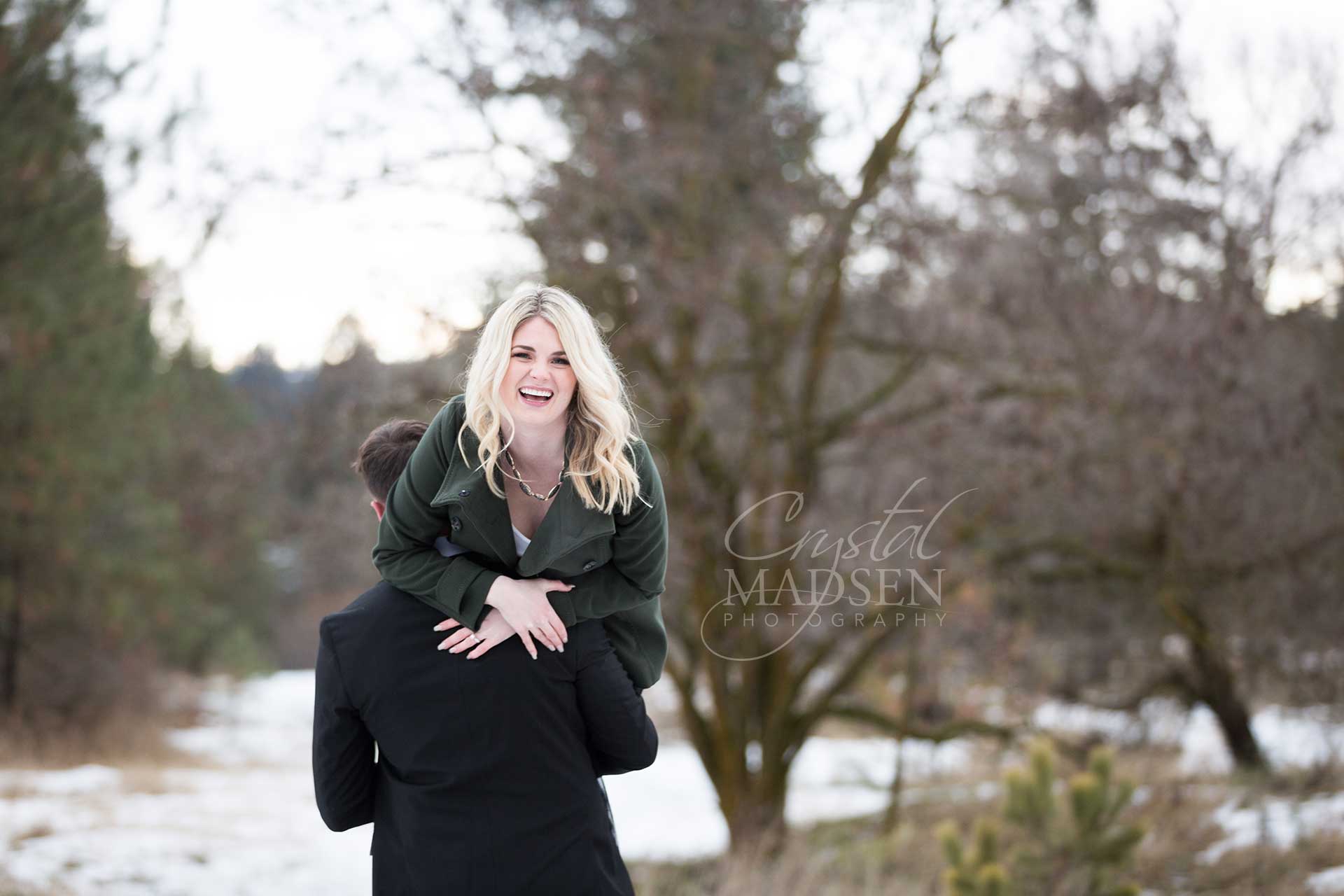 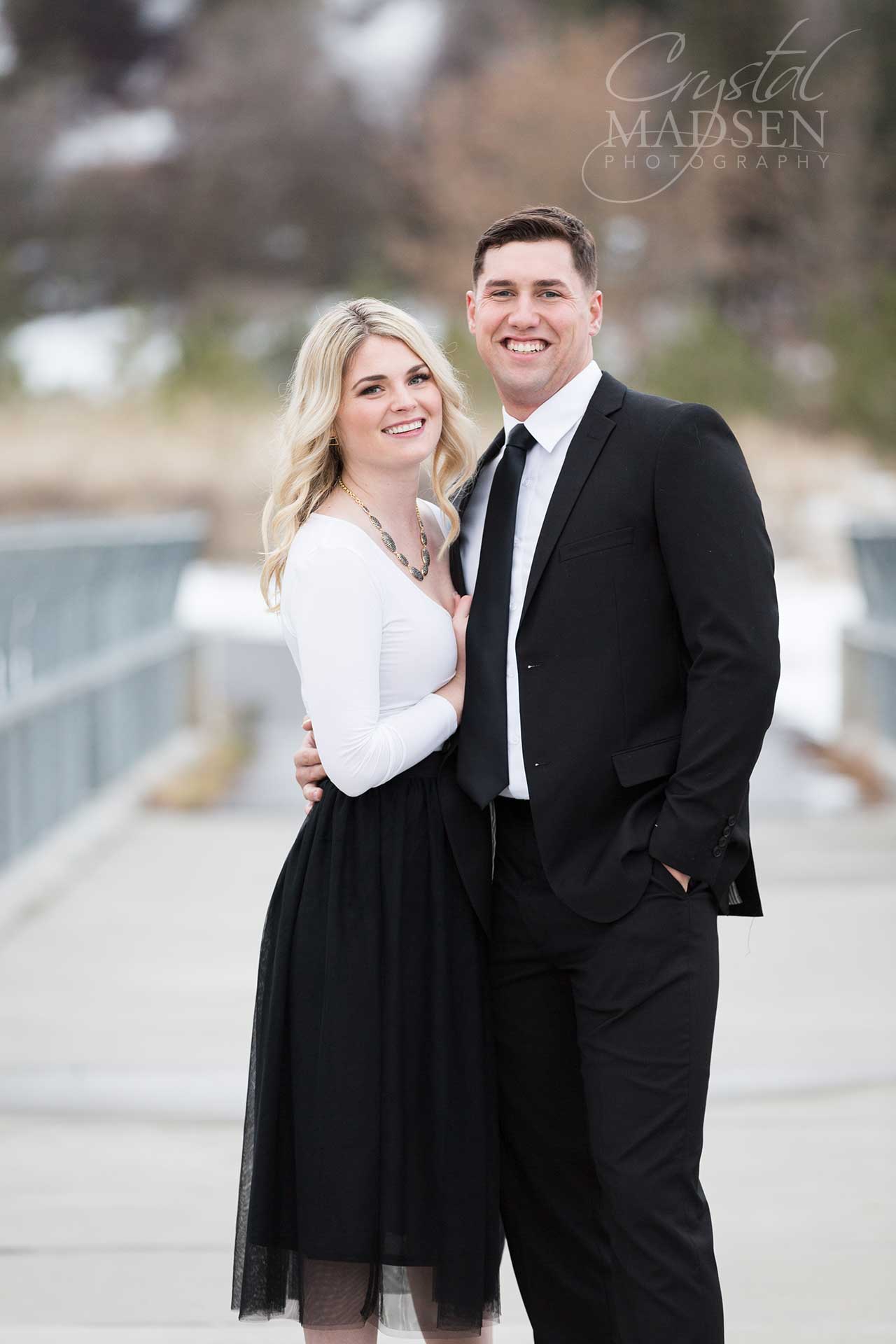 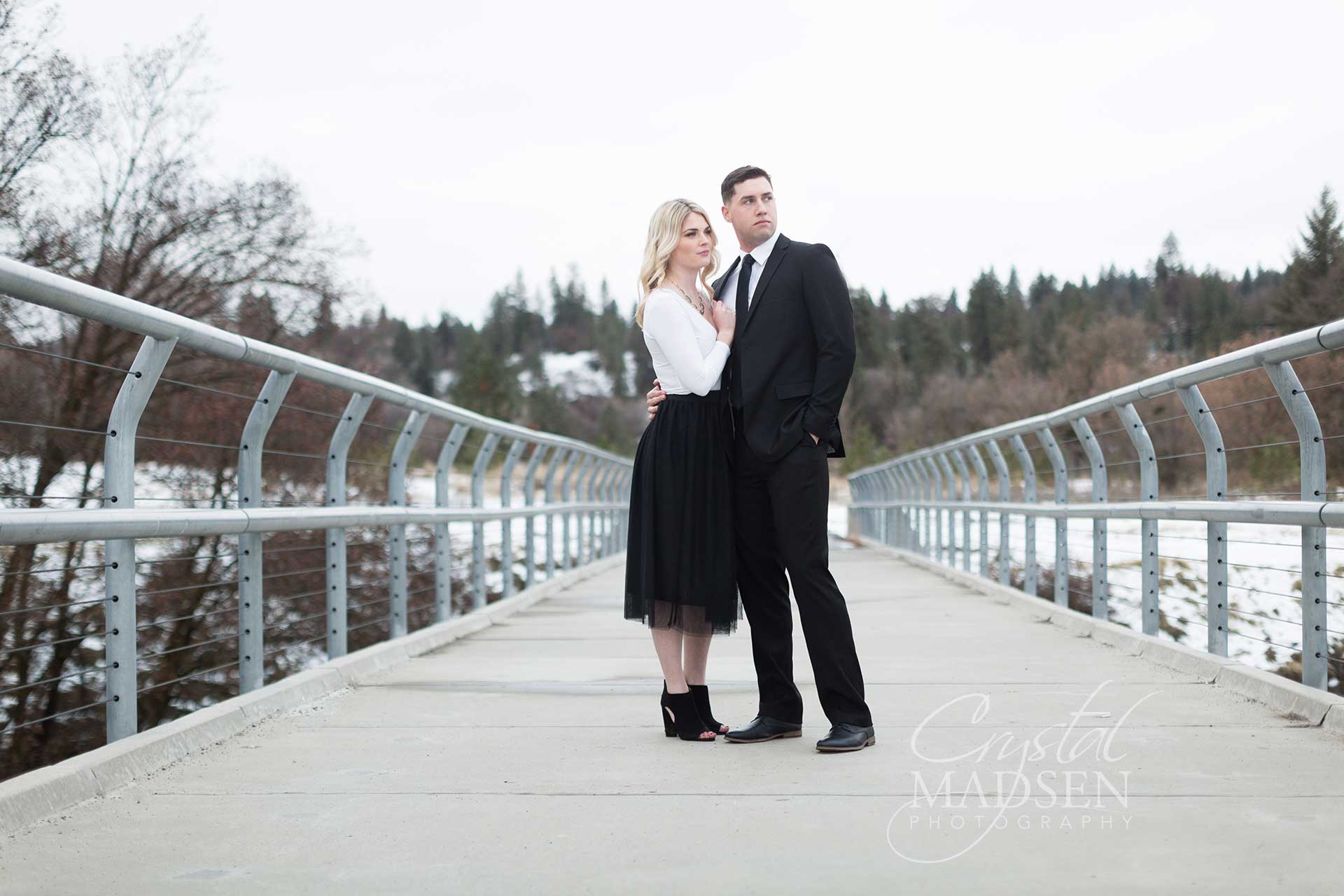 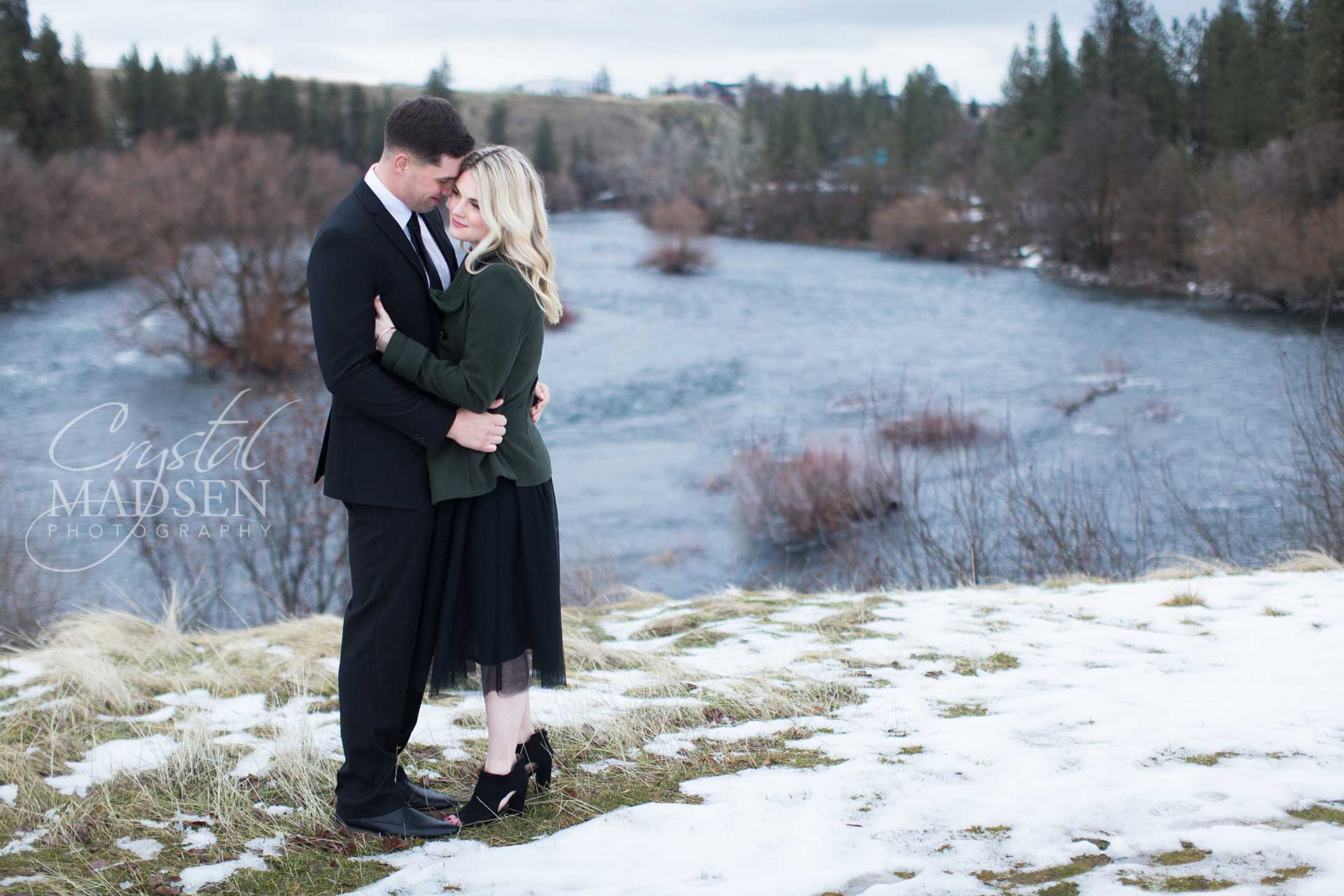 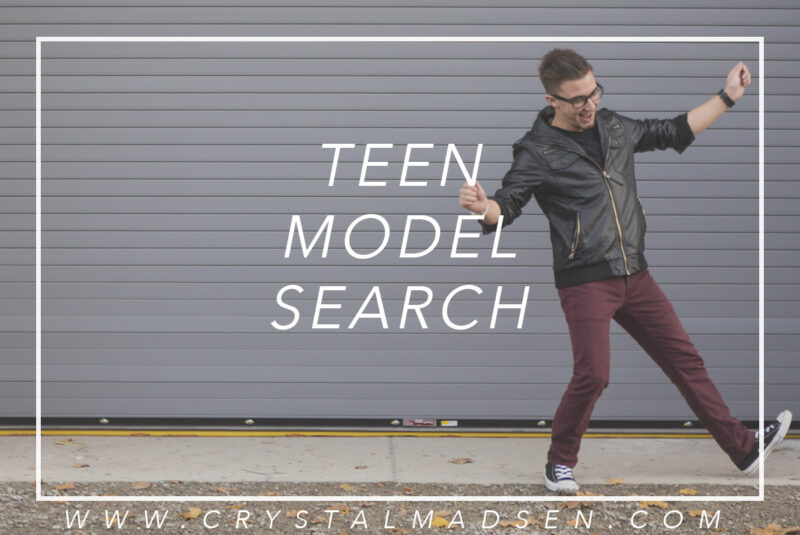 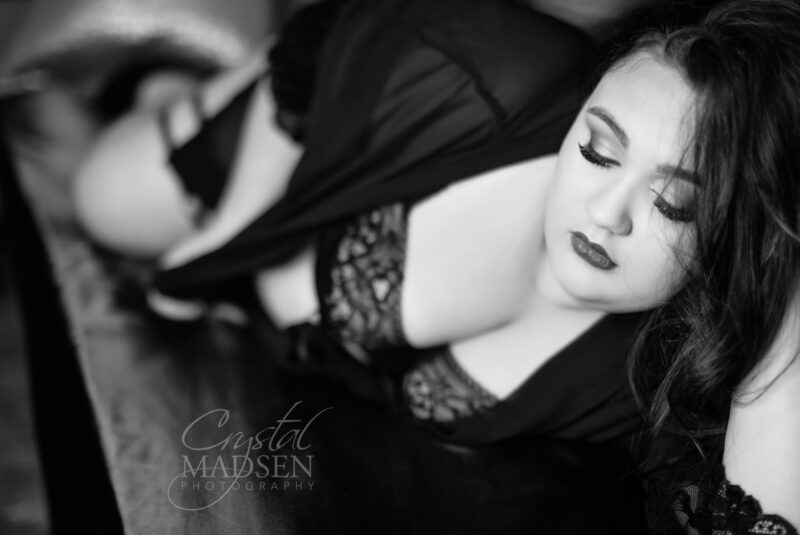 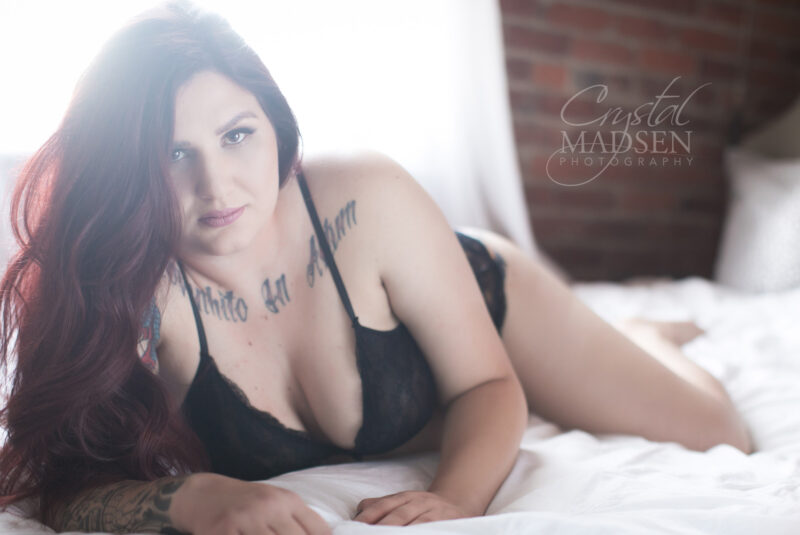